On the 7 July the ferry was asked to organise a crossing from Appledore to Instow (return), for Johns of Appledore and Instow, for a party including Nigel Barden (BBC Radio 2 Chef) plus fellow judges and journalists who were involved in awarding John's the prestigious UK 'Local Retailer of the Year'. They were all visiting Instow to visit Johns and experience the delights of the local produce and to see how the ferry service contributes to the local community and visitors. 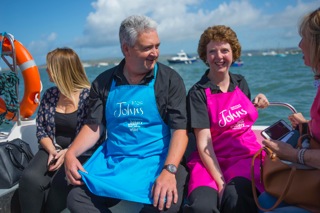 Although at the start of the day the weather was awful luckily it improved as the day progressed. Everyone seemed pleased with both the ferry trip and the food! Nigel took some local ingredients to use on Simon Mayo's Radio 2 show on the 9 July, where he duly endorsed the beauty of Appledore and Instow and of course Johns shops.

Monday 13th April 2015 was a fantastic day for all of us who volunteer for this remarkable community not for profit organisation! After less than two weeks into our fifth season we have carried our 60,000 passenger! Rebecca Stewart from Barnes, London was that person. She was presented with a special mug produced by Bideford Pottery. She is pictured here with her husband Alex, children Isaac and Kitty and ferry skipper Dane Stanley. Thank you to all our sponsors, supporters and volunteers who have made this incredible milestone possible.

During the winter the two boats, Misty Blue and Lizzie M have been maintained, upgraded, cleaned and painted ready for the beginning of the ferry season.  The first ferries of the season started at 1525h and took some passengers between Appledore and Instow prior to the blessing of the fleet.

At Appledore Slipway there was a huge crowd of people. Brian Moores, the Chairman of AIFL started the celebrations and emphasised what a successful community project the ferry has become.  Cllr Andrew Eastman praised the ferry operation and cut the ribbon to mark the beginning of the ferry season. Canon Dr Ian Lovett blessed the fleet, the volunteers and all the passengers using the ferries.  The celebrations were enlivened by Chris Millington playing sea shanties to the delight of everyone. 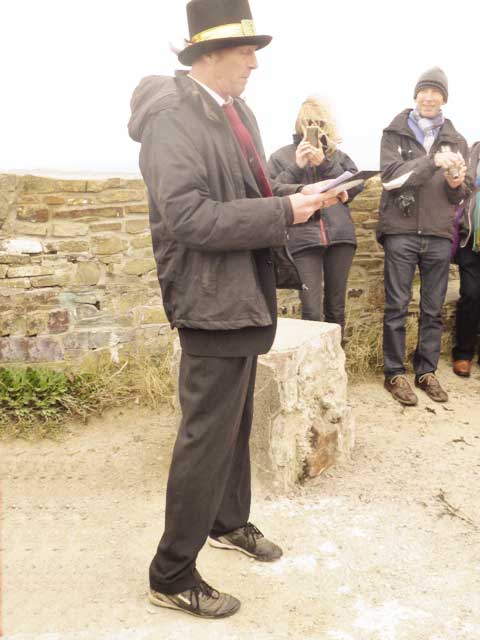 The VIPs were loaded on to the ferry and on Instow Pier, which has been beautifully refurbished, Hector Christie entranced the crowd with his good wishes for the ferry season.
Hector cut the ribbon, the fleet was blessed in Instow and Chris Millington continued to play in spite of the very cold, howling wind coming down the estuary.  Both Appledore and Torridge ladies gig rowers accompanied the ferries from Appledore to Instow and enhanced the celebrations.

Thank you to everyone who made the launch of the ferry season so special.

As it will be the school holidays there will be two boats running over the Easter period, have a look at the timetable and see when the boats are running.  If we cannot operate for any reason we shall put a news flash on the website and also on Facebook and Twitter.

There is a variety of cafes, pubs, restaurants and shops in the two villages so come along and explore.

KATHLEEN AND MAY SAILS UP THE TORRIDGE ESTUARY

In spite of rather grey skies the launch of the season took place today with a blessing of the 'fleet' at 11h on Appledore slip with a wonderful crowd of supporters.  Canon Dr Ian Lovett carried out the blessing and then we all sang a rendition of 'Ferry across the Torridge'.  The ferry went over to Instow Quay and the blessing was repeated with a great turn out of supporters including pupils, teachers and the headmistress of Instow Primary School.  The children regaled the crowd with songs and then a beautiful piece of artwork emerged through the crowd which had been made by the pupils of Instow Primary School with some outside assistance.  The Instow lily was launched on to the estuary and other artistic creations were floated on the waters.
A very succesful start to the start to the season and thank you to everyone in Appledore and Instow who came to support the ferry.

Apart from the excitement of the blessing of the fleet, the ferry, Lizzie M, carried its first passengers from Instow to Appledore and then from Appledore to Instow.  Take a look at the photos below: 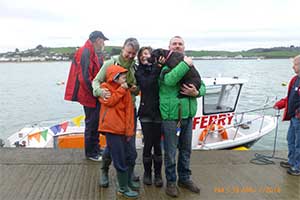 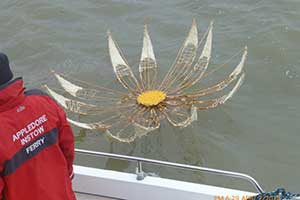 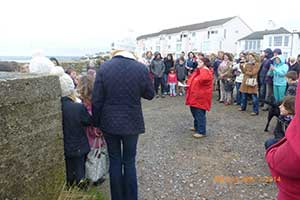 There was a good article on the ferry on Friday 23 May.  As this was an extract of the hour long interview a longer article will be available on the Daily Mirror website.

FERRY'S BEGINNINGS TO FEATURE IN A NEW BOOK

The Appledore Instow Ferry Limited will feature in a book by the National Lottery to be published this Spring. The AIFL won a £30,000 grant from the Lottery's scheme that supports village community projects. The article will focus on how the Ferry service was able to benefit from the money.

One of the UK's most read national newspapers the Daily Mirror is to document the AIFL's record in successful bids for lottery money. It's after the ferry was included as a case study in another lottery project – this time as part of a scheme called Power to Change. The article was published in May and a longer version is on the Daily Mirror website.