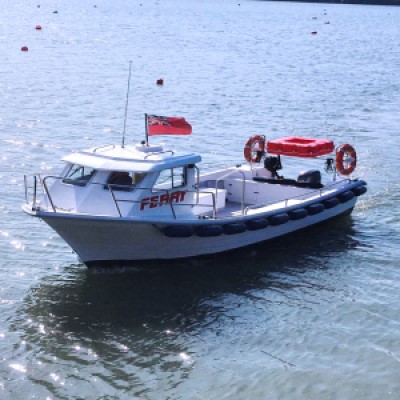 Sheila M is a 25 foot Fibramar Pescador 780, manufactured in Portugal in 2018 and imported into the UK in 2019.  It is powered by a Yamaha 60 HP fourstroke outboard engine.  It was fitted out from a bare hull and wheelhouse by local craftsmen at Instow in early 2019.  It can carry 12 passengers and up to 3 crew.  It was brought into service in April 2019, having successfully completed the licensing inspections stipulated by Torridge District Council, on behalf of the Maritime Coastguard Agency.

Lizzie M is a 22ft Fibramar Atlantic Fisher 680, manufactured in Portugal in 2010, and imported into the UK in the same year.  She is also powered by a Yamaha 60hp fourstroke outboard engine.  During our closed season 2012-2013 she was adapted from her former fishing/potting role to carry 12 passengers for Appledore Instow Ferry Ltd and brought into service for the 2013 season, having successfully completed the licensing inspections.

Both vessels are licensed to operate by Torridge District Council [on behalf of the Maritime & Coastguard Agency] and vessels are inspected annually for seaworthiness and that they carry the stipulated safety equipment.

Equipment on board both vessels includes:  a GPS system, linked to the VHF radio so that the vessel`s position will automatically be relayed in case of an emergency; depth sounders enable the skippers to navigate the narrow channel into Instow steps during low water; VHF radios link the two vessels and to our shoreside helpers, using Channel M1 or M2, with a “watch” kept on Channel 16, the emergency channel, local vessels use VHF to call for “taxi” services to and from moorings.

Our skippers are licensed annually by Torridge District Council; they are required to hold the required qualifications, and are tested on their local waters knowledge by the Harbour Master. Several skippers hold Powerboat Instructor qualifications and are actively involved with the local Yacht Club in providing RYA courses.

Our engines are serviced by Peter Short of Instow Marine Services.